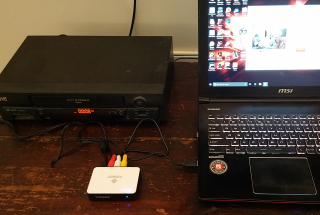 Recently, I wanted to get photos of my cousin from old home movies, and to digitally capture and edit an historic VHS tape of an interview with the co-pilot of the Bock’s Car.

You can capture photos and digital videos from VHS with a handy product called VidBox, available from BestBuy ($60) in both Mac or Windows versions. As seen here, VidBox connects to your old VHS’ RCA jacks and to your computer’s USB port. VidBox includes software to capture the video as it’s played, and you get a nice digital file to edit.

For editing, I used CyberlinkPowerDirector and PhotoDirector.  (About $99 in a bundle.) PowerDirector makes it relatively easy to add photos, music, and video clips to create interesting videos, and PhotoDirector lets you capture photos from video, as well as re-touch and create sophisticated effects. 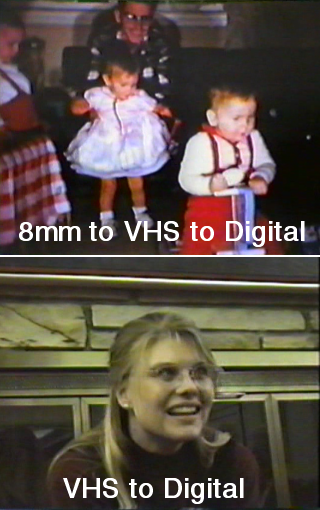 The oldest images were originally shot on 8mm and transferred to VHS by videotaping a screen. Direct-to-VHS yielded better results, but both gave me the feeling that I was reaching back into history to capture some wonderful, evocative photos that had been – until now – lost to time.

Turn your videos into books
Video images are smaller than the high-resolution cameras we use today, but, once you’ve captured photos from video, it’s an easy step to upload them to dotphoto and auto-populate a beautiful dotphoto book.  Video: How to make a dotphoto booK and get $49 off