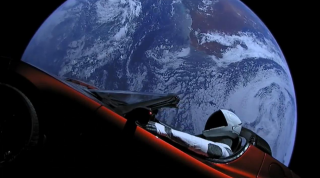 Instead of the usual concrete block for a test payload, the Falcon Heavy launched Elon Musk’s Tesla Roadster and a mannequin called Starman toward Mars.

Two and a half minutes after lift-off, the booster rockets returned for nearly simultaneous vertical landings. The event was visually spectacular.

This photo collection follows lift-off to the last image of Starman and his Tesla as he begins his billion year journey to Mars, the asteroid belt, and around the sun.