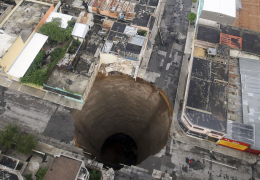 On February 28, 2013, Jeffrey Bush was swallowed by a sinkhole while he slept at home in Seffner, Florida. He was never seen again.

We often allude to the “ground shifting beneath our feet,” but the idea that one can simply disappear while sleeping is so disturbing that I wondered if anyone had ever made a horror movie about sinkholes. Only one, it turns out: “Sinkhole” was filmed in Centralia, Pennsylvania, a city that has been burning since 1962 when a dump fire ignited a coal seam. Centralia is an interesting parable about how government works: the town fathers didn’t want to spend the money putting out the fire, so it spread; then the state government deferred; then the federal government decided that it would cost billions of dollars to extinguish, and experts were not even certain they could put out the fire. Centralia was abandoned. The ground still smokes today.

The Atlantic Monthly has assembled this exquisite photo essay of the leading sinkholes on the planet. The deepest — at 1325 feet — is the Hranice Abyss in the Czech Republic.

See the great sinkholes in the world